The alarm call of the Langur (Black faced monkey) is 100% accurate, according to our guide, so when we heard one we knew that a tiger or leopard was very close. The excitement and tension in our Gypsy (jeep) rose as everyone scanned in silence for the great predator to show itself.  The continued barking of the alarm call was the only sound in the forest and added to the keen sense of anticipation we all felt.

We did not have to wait long for the tiger to appear on the road. The excitement of seeing a tiger in the wild, especially when sitting in an open vehicle not three feet off the ground, never goes away. Our guide and driver who have made hundreds of tiger sightings were just as excited as we were.

The tiger walked along the road for a period before cutting into the forest. Our guide anticipated its course and was able to position the car for another sighting on a parallel road. We managed to have a great viewing with good video and photographs which lifted all our spirits.

This video shows the sighting

Whilst not a knowledgeable bird watcher, I greatly enjoyed the spectacular bird life in the park. We saw, amongst other things, a changeable hawk- eagle feasting on an unfortunate jungle babbler. Also, when leaving the park we had a great sighting of a group of four great hornbills, a most spectacular bird. There were numerous species of kingfisher and woodpecker to enjoy, not to mention the owls. A few of the photos are included below. This place is a paradise for bird watchers. 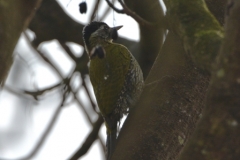 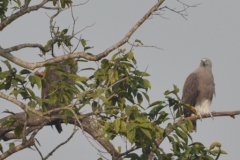 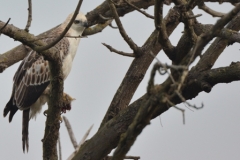 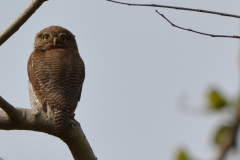 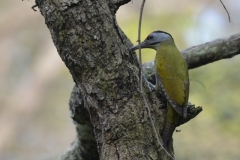 Jim Corbett National Park is a wonderful wild place and such a contrast from the hustle and bustle of New Delhi, which we had just left, a six hour drive away. My son and daughter, who had never been to India before or to a national Park, were enchanted by the place. It is India’s oldest, and one of its biggest, national parks situated in the sub-Himalayan belt.

The park ranges from thick forest to open grasslands and life is sustained by the great Ramganga River that runs through it. There are nearly 500 species of birds found in the park with many raptors. The mammals include Tiger, leopard, elephant, bears, otters, yellow throated martins and many deer species.

Tigers are the big prize but I would advise you to enjoy all the wildlife that you see. See my blog on getting the most from your time in the park.

We stayed in Dikhala camp which has the advantage of being positioned in the heart of the national park in one of the richest areas for wildlife. This means that from the moment you start your game drive you are likely to see wildlife, in fact, the great vantage point of the camp, overlooking the Ramganga River, allows good viewing from the camp itself.

The camp is government run and quite basic, but, nonetheless perfectly adequate. The food is all vegetarian, as they do not want to attract the wrong sort of interest!, and is very good. Included in our package was an afternoon and morning game drive and one elephant safari.

There are many luxury lodges on the boundary of the park that also offer the opportunity for great wildlife sightings with a drive in through the gates twice a day.

We had a total of three good tiger sightings in our three days in the park, a tremendous success rate but not as good as one person we met who saw five tigers in one afternoon!!

On one occasion we were watching, and filming, a couple of peacocks in the road when we heard a cheetal (spotted deer) alarm call. Shortly afterwards, the tiger appeared very close to the two peacocks, who were unmoved. We were able to see India’s national mammal and its national bird together!

The final sighting was on our last morning as we were making our way to the gate to leave. We stopped at a viewing point where we alighted from our vehicles. The call “tiger” went up from one of the guides and, sure enough, there was a tiger walking down to the river’s edge in the distance. We were able to use our binoculars and long lenses to view the large male wade the river and disappear into the forest on the other sid,. a wonderful way to end our trip to Corbett. 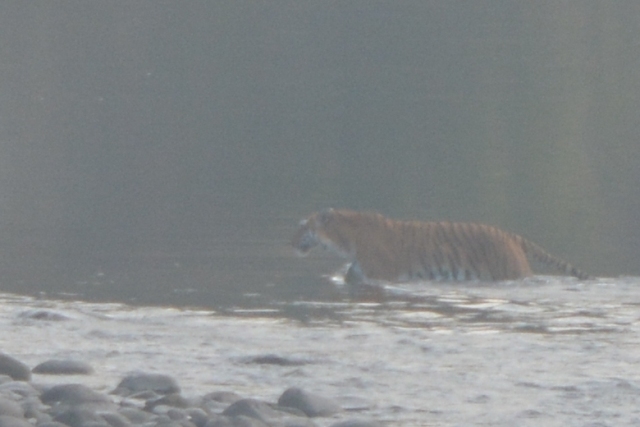 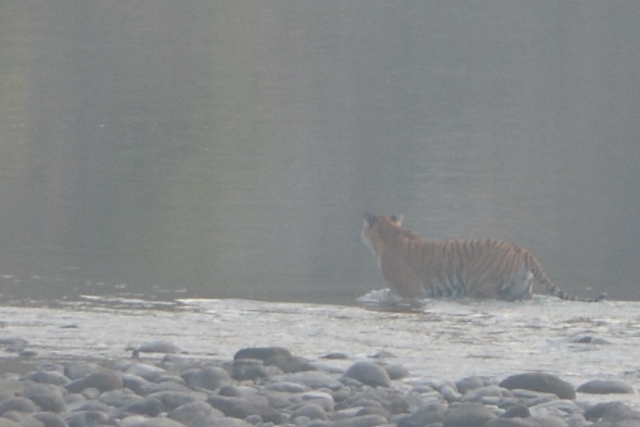 I had visited Corbett National park previously in 2006 and, in my opinion, it has improved significantly in the last ten years. Our wildlife sightings were much better on this occasion and also the integrity of the parks boundaries have been improved. In 2006 there were many people in the park harvesting leaves and other vegetation for their livestock. This has been stopped.

The official count seems to bear this out as the number of tigers in the park have steadily increased and now stand at around 240. This is wonderful news, particularly when you consider the numbers were as low as 40 in the 1970s.

February is a good time to go to the park although it can be very cold, particularly in the mornings, so take plenty of warm clothes. We were told that in April and May, the summer, there can be very good sightings of tigers in the water which they love in hot weather. Also a lot of the elephant population migrates to other areas in the winter and returns in the summer. Temperatures in the summer can hit 40C though.