An underrated aspect of a visit to India is the opportunity to tour rural areas and witness traditional dress, farming methods and lifestyles. On a visit last year I had the chance to include this in my itinerary.

Driving through the country is fascinating as there is so much to see. You can witness people going about their lives as you pass through villages and farming communities. So much of life seems to go on outdoors.

India is one of the fastest growing economies in the world so it is changing very fast and agriculture and rural life is sure to be modernised and many sights and experiences will disappear soon. For this reason, I would urge you to try and experience what you can of it if you travel to India.

When we were visiting Kanha reserve the park was closed for half a day each week, so on our free afternoon, we decide to take up the offer of touring a couple of local villages. It turned out to be a truly fascinating experience and we felt privileged and grateful to have been allowed a glimpse into local people’s homes and lives.

There are two tribes that live just outside the park, the Baiga and the Gonds, and we were fortunate enough to tour both their villages. These tribes have lived side by side for generations, and relations between them are very good, but they lead completely separate lives.

In the tour of the Baiga village we were shown the local school, which had finished for the day, the inside of one of their houses and their traditional dress and drum. A demonstration of the creation and smoking of a local cigarette was also provided. This consisted of a leaf from the forest that was rolled to create the casing which was then filled with leaf fragments. It was then lit by a spark from a flint. We didn’t try it! 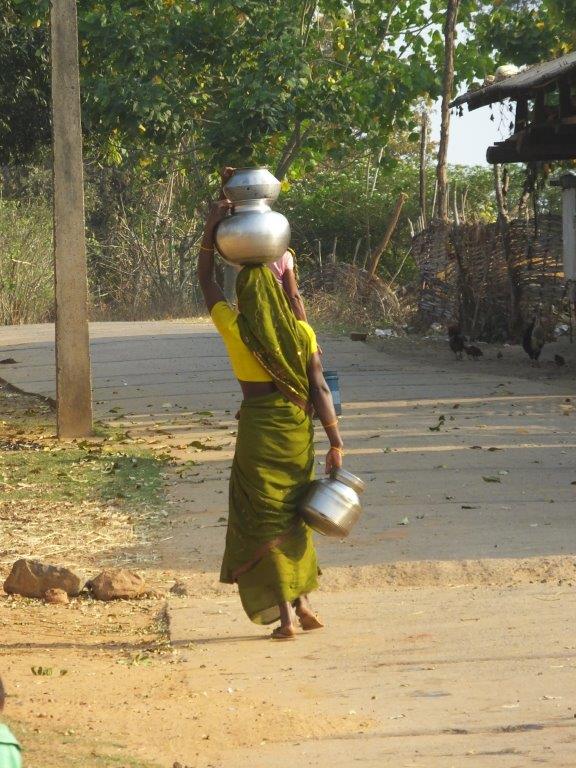 The drive through the village revealed the fields enclosed by mud banks to capture the rain, which is very seasonal.

A little further on we witnessed a group of women making plates, from leaves, to sell at the market for a few rupees. It was really good to see that this eco-friendly solution for disposable plates was in place and polystyrene had not caught on. 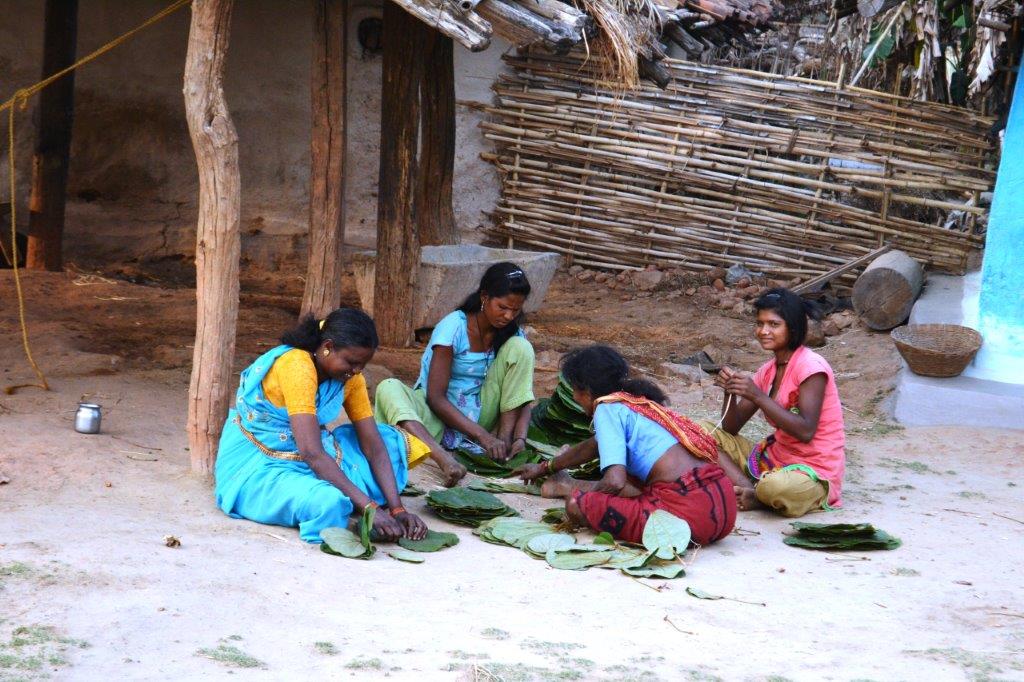 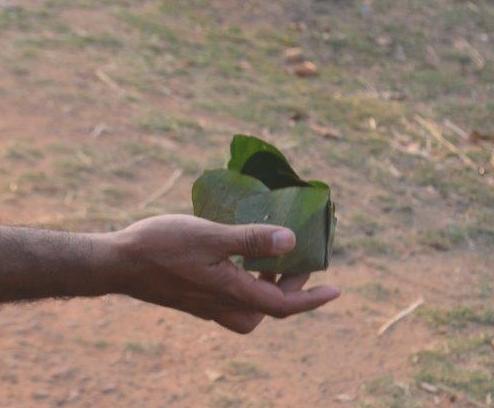 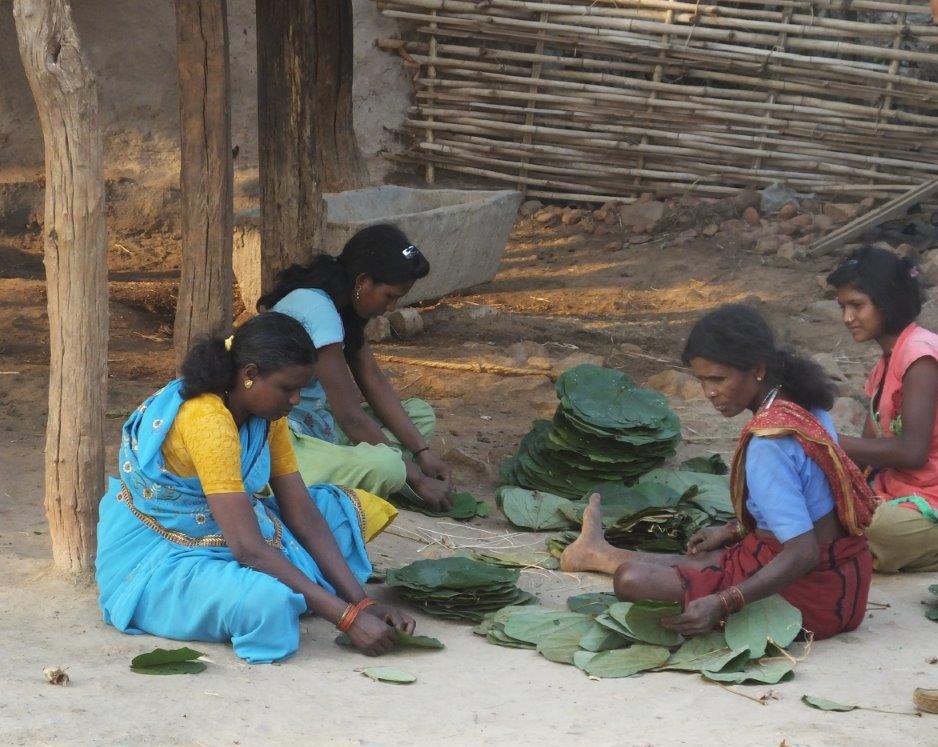 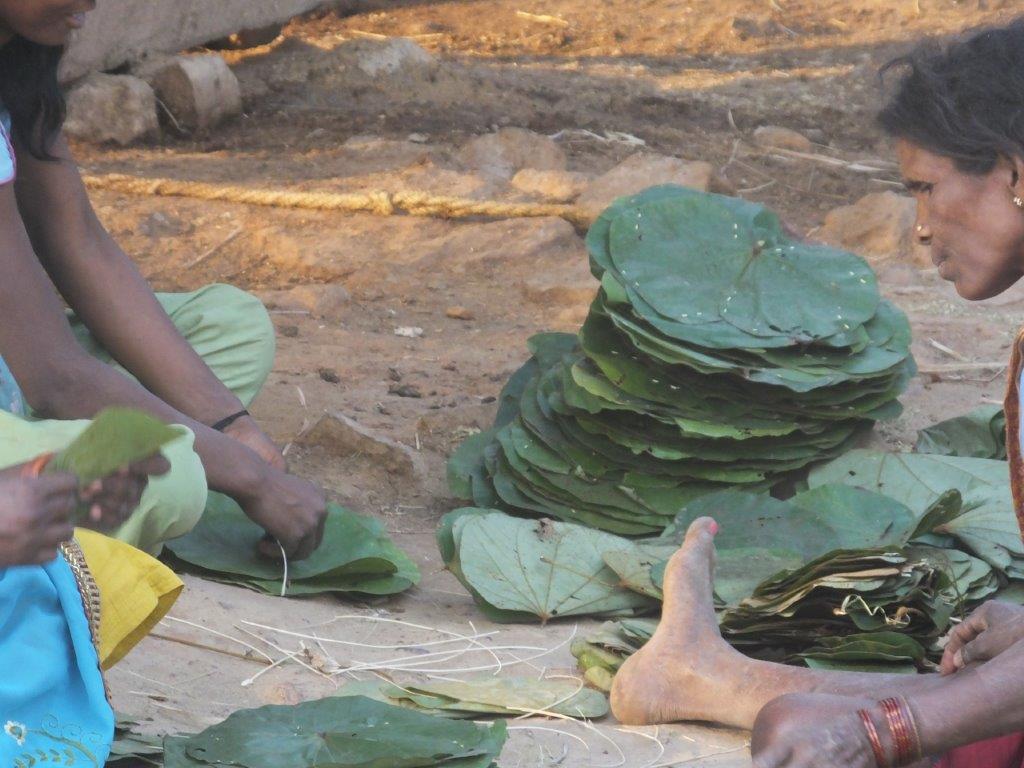 Another fascinating part of the tour, in the Gonds village, was a visit to the local distillery house! We were shown the full process for brewing and then distilling a strong spirit. The initial ingredient is a local flower that is fermented to create a “wine” which is then distilled. The distillery was very simple but obviously effective. It consisted of two pots one on top of the other (see photograph). The lower pot contains the “wine” and the upper pot is full of cold water. As the alcohol evaporates from the lower pot it meets the cold upper container and condensed and runs down the side and out of a spout.

The strength of the spirit was checked by dipping a taper into the distilled liquid and then setting it alight. How well it burned and the colour of the flame let the distiller judge the “quality”!

We enquired about the price and were told a litre would cost 40 rupees about 50 pence. Quite a lot cheaper than Scotch whisky and a lot stronger! We requested a taste but it never materialised. I think they felt our constitutions were too delicate.

You might want to check local laws before following these instructions and trying this for yourself.

What a fascinating afternoon we experienced. We had been thinking that we might have wasted time as the Tiger reserve was closed but instead we enjoyed a true highlight of our trip to India. The villagers were extremely welcoming and generous, allowing us to visit their homes and walk through their villages. Many of the villagers had jobs associated with the tiger reserve but maintained their small holdings and village life.

One thing that did strike me was, that a generation or two ago, many farming people in the UK would have been living very similar lives. A lot of the buildings would not look out of place in a folk museum like St Fagans in Wales and we were fortunate enough to see them with vibrant village life around them.

A group of us are visiting India again soon and have put together the itinerary shown here. Again we have included a good amount of time in rural areas but this time in Kerala South India.

Follow this site if you want to see how we get on.